The LG SM9000 is one of the best NanoCell TVs from LG this year. It is the successor to the LG SK9000 from 2018. This impressive LCDLCD = Liquid Crystal Display - a type of screen using liquid crystals for creating the image TV scores with future-proof features, but also has some weaknesses. We explain all advantages and disadvantages in detail.

Workmanship and design of the LG SM9000

The LG SM9000’s design and workmanship are great. Optically it is very similar to its big brother, the SM9500, which is technically different. More on this later. The TV is mostly made of plastic, but has a high quality feel to it. The arc shaped stand looks great and allows you to use a slightly smaller sideboard instead of one as wide as the unit itself. However, this stand makes the TV wobble a little. If your sideboard has a fixed stand, this is not a problem though. The TV is available in 55, 65 and 75 inches, some with slightly different model numbers.

Due to the IPSIn-Plane Switching, type of LCD Panel panel, black level and contrast are unfortunately rather weak. Although the TV has Full Array Local Dimming, this feature doesn’t contribute too much. The large 75 inch version of the SM9000 even has “Full Array Local Dimming Pro” according to LG, but this makes a barely noticeable difference. With demanding HDRHigh Dynamic Range - image/video with more dynamic range (contrast range) videos in a rather dark room, the TV will have its problems. SDRStandard Dynamic Range - image/video with a conventional gamma curve (opposite: HDR) - "normal" videos content looks very good, though.

On the other hand, the viewing angle of the device is extremely wide. If you have a large couch or like to watch TV in large groups, for example with friends or family, it’s a great feature. In addition, IPS panels are generally recommended for well-lit rooms, as black images are displayed with a slight grey tint. This is much less noticeable at high brightness levels. In addition, the SM9000 becomes sufficiently bright in exactly such rooms.

It also handles reflections very well, so that opposing light sources do not have much influence on the picture. If you are looking for an equivalent device for dark rooms, the Samsung Q70R will be better suited.

The display of fast content works very well on this LG TV. The response time is quite low with 5ms and can only be one bested by OLED TVs with 1ms. There’s also a motion interpolationArtificial calculation of more frames than the source material has to offer feature so that content can be interpolated up to 120 HzHertz is the derived SI-unit of frequency with 1Hz=1/s - When talking about TVs this means how many different pictures a TV can display in one second.. However, it should be noted that this results in the so-called soap opera effect, which some people might not like.

Like the larger SM9500 and the LG C9 OLED TV, the LG SM9000 supports HDMI 2.1, which offers many advantages. On the one hand gaming with 4K and 120 fps is possible. Currently no console can deliver this yet, but when Playstation 5, Xbox Project Scarlett and Google Stadia are released, this potential HDMI 2.1 can be fully made use of. This capability alone makes the LG SM9000 a TV ready for the future.

Compared to other flat-screen TVs, the sound of the LG SM9000 is fine. Due to the flat design, the bass frequencies are barely pronounced. With the LG SM9000 this is not the case – the bass is audible, but can’t provide the rumble of a real subwoofer. Dialogues are easy to understand and the TV can get pretty loud. If you’re a bit picky about sound, though, we recommend using a soundbar or a hi-fi system.

Based on LG webOS 4.6, the Smart TV features on the LG SM9000 run very well. Voice control is possible via Alexa as well as via Google Assistant, which will please all those who don’t always want to use the included LG Smart Remote. The best known and most used apps, Netflix, Amazon Prime Video etc. are of course pre-installed and can be controlled via voice or a shortcut on the remote. Unfortunately, webOS 4.6 displays ads which cannot be opted out of.

It is hard to understand why LG uses different model numbers for two identical TVs. The screen sizes 55 and 65 inches are called SM9010, while the 75 inch model is called LG SM9070. There are no technical or optical differences though.

Optically SM9500 and SM9000 are the same, but the picture difference is clearly visible. The brightness of the SM9500 is much higher, which is better suited for HDR videos. Also the contrast ratio is better due to the better Full Array Local Dimming feature. The connections and especially the compatibility to HDMI 2.1 is also given. Those who like to watch HDR content, for example 4K HDR Blu-rays, might consider taking a little more money into their hands. It is available in 65 inches only. If 4K isn’t enough for you, the SM9970 is a TV that has the same features as its little brothers, with the exception of the 8K panel. This 8K NanoCell TV was recently unveiled at IFA 2019 and will soon be available in the US. Currently, LG exclusively offers a 75 inch model.

The LG SM9000 is a great TV that especially scores with its HDMI 2.1 functionality. Especially for brighter rooms it is a great choice and will go down very well with passionate gamers, since it is ready for the next console generation with HDMI 2.1. The viewing angle is very wide due to the IPS panel, which is a great option for gaming or watching movies or especially sports with a larger group. For dark rooms, however, there are better options, for example the Samsung QLEDs or the current OLEDs. 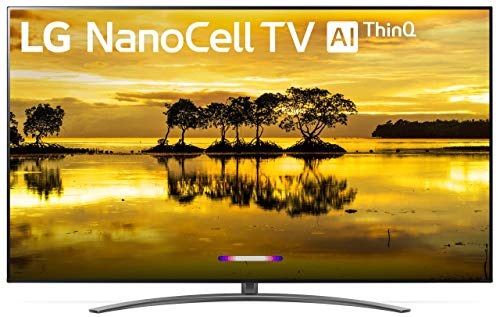