The LG SM9500 completes LG’s 2019 4K NanoCell Series and offers a host of benefits: HDMI 2.1, wide viewing angle, great brightness and good contrast. We’ll explain in detail why it’s one of the best LG TVs of the year.

Workmanship and design of the LG SM9500

The design of the SM9500 is similar to its smaller brother, the LG SM9000. Both TVs have a similar frame and the same half moon shaped stand. The stand is nice, but it makes the TV wobble when slightly nudged. On the other hand, it can also be simply mounted on the wall. Basically, the design is extremely high-quality and chic. The back is entirely made of plastic, while the frame is made of metal. Practical cable management is possible through the back of the hollow stand.

Picture quality: Great contrast ratio and brightness thanks to IPS

Since the LG SM9500 has an IPS panel, this makes some features to be expected. With these panels the contrast is actually slightly limited, but thanks to Full Array Local Dimming it is improved in the SM9500. This results in a contrast of about 2400:1. VA panels are better at this.

On the other hand, the viewing angle is much wider, which means that colors do not lose their depth and luminosity even when viewed at an angle. This is a good feature for those who would like to use the TV with larger groups or have a wide couch.

Basically, the LG SM9500 is more suitable for bright rooms, as it can become very bright with SDR and HDR content and handles reflections excellently. It is less suitable for dark rooms, as black content cannot be displayed as uniformly as with VA panels. An equivalent TV for this purpose would be the Samsung Q80R.

Motion handling is excellent on the LG SM9500. The response time is only 5.4ms, so there is virtually no motion blur when displaying fast content. However, this can result in Stutter. In order to display movements even more smoothly, there is a Black Frame Insertion feature (BFI), whereby every second frame at a repetition rate of 120 Hz is black. This creates an effect that makes the image a bit crisper. However, this is a matter of taste and can be switched on and off if desired.

Content with lower refresh rates can be interpolated up to 120 frames per second. Not everyone likes the artifacts that can appear in particularly fast scenes. Therefore this is also a matter of taste. The TV is also capable of removing Judder from any source, which is great.

For gaming, the LG SM9500 is absolute top class. Thanks to HDMI 2.1, it features HDMI Forum VRR and Auto Low Latency Mode. In addition, HDMI 2.1 allows up to 4K @ 120 Hz, which Playstation 5, Google Stadia and Xbox Project Scarlett will certainly make use of. This makes the LG SM9500 extremely future-proof for all those who are already interested in the upcoming console generation.

At 1080p the input lag is 13.7 ms @ 60 Hz and 7 ms @ 120 Hz. At 4K @ 60 Hz it is again 13.7 ms. These are excellent values that allow very fast and responsive gaming. The Auto Low Latency Mode on this TV is called “Instant Game Response” and causes the SM9500 to automatically switch to Game Mode as soon as a console is switched on. This allows for the low input lag.

First of all: For a flat screen TV, the sound of the SM9500 is not bad at all. It can get quite loud – enough to sound a living room or an apartment without disturbing the neighbors. Even dialogues are always easy to understand and are not drowned out by other frequencies.

The highs and mids are well reproduced, but as expected the lows leave something to be desired. This comes as no surprise with the flat design, as bass frequencies in particular need space to unfold. If this is particularly important to you, consider integrating a soundbar or a surround system.

The LG SM9500’s Smart OS is fantastic. LG webOS 4.6 has the most important apps pre-installed, so you’ll find apps like Netflix, Amazon Prime Video or YouTube upon first installation. HDR enthusiasts will be pleased that Netflix and YouTube can play their content in HDR.

If you need even more, the LG Content Store offers a huge selection of other applications. The included remote control is very easy to use and can also control other devices with a small modification via IR.

Unfortunately, LG webOS displays ads, which cannot be opted out of by default. This is the case with all LG TVs. The LG SM9500 is not the “best” TV of the NanoCell lineup despite all its high-quality features. Its bigger brother, the LG SM9970, has an 8K IPS panel, which allows four times the resolution of 4K. The rest of the offered features are exactly the same as the LG SM9500. It’s only available in 75 inches – but 8K won’t make much sense with a smaller size anyway.

The LG SM9800 is a fantastic TV whose features are particularly effective in bright rooms. Thanks to good top brightness and sufficient contrast for SDR and HDR, it also looks very good with many light sources, as reflections have little effect on it. This makes it one of the most exciting IPS Panel TVs of the year, especially due to the HDMI 2.1 functionality, which will especially be used by the Next-Gen consoles. However, for dark rooms we would recommend another device, e.g. the Samsung Q80R. 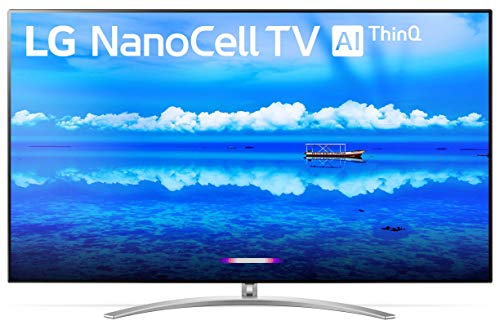