The Sony X800G is part of the Bravia LCD TV line-up of 2019. As the most affordable model, it doesn’t come close to the flagship Sony X950G, but in view of the price it delivers good performance. It is available in sizes 43, 49, 55, 65 and 75 inches. Find out on tvfindr whether its performance is sufficient to fight the competition.

Quality and design of the Sony X800G

The design of the Sony X800G is reminiscent of the rest of the Bravia series of 2019, especially the similar design of the stand. It is well made and makes a solid impression with its matte black finish. The feet provide a secure stand, but cannot completely prevent the TV from wobbling a little when touched. However, this doesn’t cause any problems during normal use.

If you are not planning to hang the TV on the wall, you should note that the feet are relatively far apart. The larger models require a rather wide sideboard. For wall mounting, however, you should be aware that cable management can be challenging, as two HDMI outputs and all audio outputs go out to the rear.

The built in IPS panel with 60 Hz generates 10 bits (8 bit + FRC) of color depth. The TV should generally be used in well lit rooms with many windows. This makes it very similar to the LG SM8600. In a dark environment the limited contrast (1000:1) and the disappointing blacks are clearly noticeable. Unfortunately there is no local dimming, which could have improved the performance in dark rooms. This is reserved for the higher quality models of the series.

These flaws are the price of a wide viewing angle, so you can also sit and watch the screen at an angle without experiencing limited image quality.
On the other hand, the Sony X800G handles reflections very well. The brightness of 330 to 400 Nits will also satisfy in bright rooms. If you’re not looking for accurate, natural colors, what Sony is actually known for doing quite well, the X800G can reach a maximum brightness in vivid picture mode of close to 500 Nits.

If you’re into HDR video, the Sony X800G isn’t the TV for you. The contrast ratio just isn’t sufficient. So it’s no big deal that it doesn’t support dynamic HDR formats. Ordinary SDR content, such as cable and satellite TV, DVDs and Blu-rays, looks very good.

The largest 75 inch model is very different from the other sizes. Here a VA panel is used, which provides better blacks and contrast ratio, but has a more limited viewing angle.

If 75 inches in too big for you and you’re looking for a budget TV set for darker environments, we have other recommendations for you. Have a look at the Samsung Q60R or the Samsung RU7100 an.

The Sony X800G processes fast moving footage, as is often the case with action films, very well. The 60 Hz display has a response time of about 5ms, so there’s hardly any motion blur. Only OLED TVs like the LG C9 can exceed this value noticeably with only 1ms. This is why the X800G is a really good choice if you’re looking for a TV to watch sports on with a couple of friends in the afternoon or early evening.

Compared to other current TVs, gamers with a professional standard won’t enjoy the Sony X800G very much. Important features, which are definitely available in this price range, are missing. There is no VRR through FreeSync or G-Sync, no Auto Low Latency Mode and the Input Lag is somewhat high compared to other models: 32.5ms at 1080p @ 60 Hz and 34.5ms at 4K @ 60 Hz.

For games that aren’t about lightning fast reactions, that’s definitely enough. But first person shooters like Call of Duty: Modern Warfare or Battlefield 1 are a lot more enjoyable with a very low input lag. A Samsung RU8000 can provide this with just under 7ms.

The sound of the Sony X800G is unfortunately only mediocre. The sound from the 20W stereo speakers has almost no bass, which is due to the thin design. It makes sense to use a soundbar or, if available, a HiFi system. This is especially worthwhile because the X800G can output Dolby Atmos sound via Dolby Digital Plus.

Like the rest of the Bravia series, the X800G runs the SmartOS Android TV 8.0 Oreo. The app selection is huge, while most of the most popular apps are pre-installed. This applies to Netflix or Amazon Prime Video, for example. If you prefer to do without the included remote control, you can use Google Assistant. Apple AirPlay 2 will be added via update.

The Sony XG80 is a decent mid-range IPS LCD TV. Here you get good 4K quality without any extras – perfect for people who don’t need any extras. Those who watch more television in bright surroundings with lots of people will get what they are looking for here. For example, the XG80 is a good choice for watching football. But if you like gaming and movies in the evening, you’ll find better alternatives. 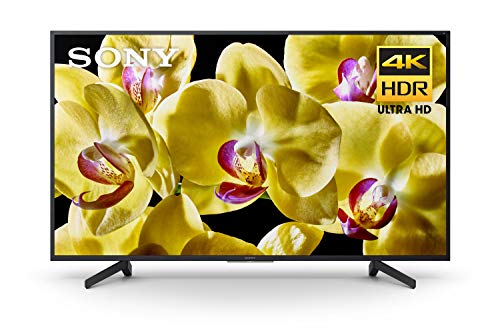 58 %
Are you interested in the Sony X800G Bravia?
Then benefit from its discount price now!