Japanese electronics giant Sony raises the bar with its 2019 Bravia LCDLCD = Liquid Crystal Display - a type of screen using liquid crystals for creating the image TV Line Up. The flagship is the X950G, available in 55, 65, 75 and 85 (!) inches. Find out why the Sony X950G is a true picture monster and how the individual models differ from each other.

Processing and quality of the X950G are very high-quality. Included are two hollow feet, which not only look chic, but also cleverly conceal cables. When wall mounting, the cables can also be hidden, but unfortunately not so easily. The connections go downwards, so that inconspicuous cable routing is difficult, but not impossible.

There’s no One Connect Box like the Samsung Q90R for convenient cable management at Sony. Another downer: all sizes of the Sony X950G only draw quite a big amount of power – other manufacturers can do better with the same performance.

Picture quality and Motion Handling of the Sony X950G

The 10 BitThe color depth is measured in Bit. 8 Bit stands for 28 different values for each color channel, for TVs those are red, green and blue. By combining the 3 rgb channels 28*28*28=16.777.216 colors are possible. HDR10 or the dynamic HDR formats work with 10 or even 12 Bit. VAVertical Alignment, type of LCD Panel panel with Full Array Local Dimming delivers a very deep black. In tests 60 dimming zones could be determined. The Samsung Q90R with 480 dimming zones can do this better. The contrast is 4900:1.

The maximum brightness of the Triluminos display is 1200 Nits and reproduces every image effectively. Compatibility with HDR10HDR10 Media Profile - HDR with a color depth of 10 Bit in the Rec. 2020 colorspace and Dolby VisionDynamic HDR-format with a color depth of up to 12 Bits and Mastering of up to 10,000 Nits is a special treat. In addition, the XG95 can even play IMAX enhanced videos – but the selection in the US is still very limited.

The viewing angle is a bit poor for the smaller screen sizes. The larger versions (75 and 85 inches) of the X950G can do this better. This is due to the additional X Wide Viewing Angle layer and at the expense of the black level and contrast ratio, which is still a good 3500:1.

The display of fast paced content, called motion handling, works very well at Sony. For videos with normal frequencyHertz is the derived SI-unit of frequency with 1Hz=1/s - When talking about TVs this means how many different pictures a TV can display in one second. (24-30Hz), object-based interpolationArtificial calculation of more frames than the source material has to offer (X-Motion Clarity) can be used to artificially calculate intermediate images. This works better with Sony than with other manufacturers with less Soap Opera effect and smoother movements. Also the response time is really impressive with 4ms.

Gaming on the Sony X950G

The impressive picture of the Sony X950G surpasses the sound by far. Sony’s “Acoustic Multi Audio” system uses forward and upward facing speakers with a rated output of 20W. Upgrades are possible: Unlike Korean competitors from Samsung, Sony’s Japanese devices support dynamic surround formats DTSMulti-channel-sound-system (Surround Sound) competing with Dolby Digital:X and Dolby AtmosObject-based surround sound format with 3D-Sound from any direction via HDMI eARC. This makes it easy to connect and use a corresponding soundbar or hi-fi system.

Smart features based on Android

In contrast to the predecessor X900F, the Smart TV features have improved. The X950G comes standard with Android 8.0 Oreo. The menus are considerably faster than last year and the operation is more intuitive, not least thanks to the new remote control.

Google Assistant is pre-installed, Apple AirPlay 2 will be added via update. The most important apps like Netflix, Google Play or Amazon Prime Video are already installed before unpacking.

Variants of the Sony X950G The X900F actually comes from the 2018 XF series, but Sony has decided not to stop production and to keep the XF in the current lineup.

The X900F differs insignificantly from the X900G and X950G in terms of picture technology. It doesn’t get the same peak brightness, but has more contrast. Under normal conditions, however, this is hardly noticeable in comparison. The XG series also has a lower input lag, which is good for gaming.

Furthermore, the X900F does not have Dolby Atmos and DTS:X, just like the X900G. This is reserved for the top model.

The Android 7.0 Nougat operating system is unfortunately slower on the X900F. Also missing is the stylish remote control that was given to the 2019 lineup. The X900F is available in the 49, 55, 65 and 75 inch sizes and thus represents a solid alternative to the Sony X950G that provides a comparably powerful device and saves a lot of money.

A true picture monster for (almost) everyone

The Sony X950G is the flagship of the Bravia LCD lineup from 2019. With four different sizes from 55 to 85 inches there should be something for everyone. In terms of picture quality, the X950G is very similar to the 2018 X900F. The smart features and the potential for gaming, on the other hand, have become much better. If the prices drop a bit, Sony might become a serious high-end QLED competitor. 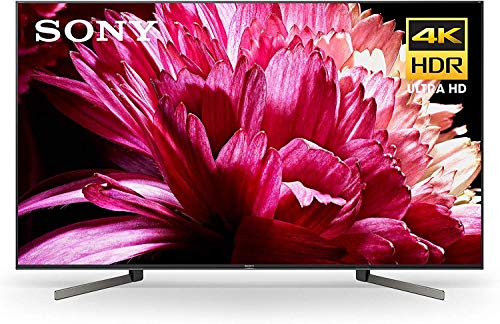 74 %
- outdated rating -
Are you interested in the Sony X950G Bravia?
Then benefit from its discount price now!