For many years now, you can enjoy the established Ambilight as a feature in televisions from Philips. The electronics manufacturer has been using the back wall illumination in its model series since 2004. At that time, it was not yet dynamic and could only be switched on manually, but the patented technology has developed into today’s Ambilight Next Generation. Since competing TVs do not offer an equivalent feature so far, we will show you how you can still upgrade your TV with Ambilight. Learn how it works, how to do-it-yourself and which Ambilight-Kits are available.

Basically, Ambilight is a smart marketing term for a special LED light that is mounted on the back of the casing. The purpose: to project colors of the picture content beyond the screen’s borders onto the wall in back, and thereby indirectly increase the viewing impression.

The built-in system makes the rear LEDs react in interaction with the displayed image. The color tones and luminosity are dynamically adapted to the displayed material. The intensity of the effect can be adjusted in steps.

In combination with Ambilight, you should ideally use a wall that is as bright as possible to achieve the best results in the room. The darker the coloring behind the TV, the more the coloring becomes swallowed up. However, the feature also offers a solution in the form of a color correction that you can use in this case.

In addition, eye complaints that occur during watching TV are to be reduced many times over. Ambilight technology does not only have a single concentrated light source, but the light source is evenly distributed. In this way, the eyes are no longer overstrained.

Ambilight adapts to the environment

The innovative technology only works so well because it reacts to its environment. Dynamic is the key word here, because it is not enough just to switch on the lights. There are light sensors at the edge of the screen that detect how much brightness there is in the environment.

The latest and most sophisticated version of Atmo lighting goes by the name Ambilight Next-Generation or simply Ambilight 3. Of course, this is not without reason. Until now, the solution grouped LEDs together and could not reproduce scenes with the utmost precision. Especially in the case of scenarios with clear color subdivisions, you can notice this when you take a closer look.

The next generation of mood lighting resolves more precisely and is able to follow color gradients even more accurately and thus bring them more precisely onto your back wall. The result of the already quite impressive color feature is therefore even more remarkable.

Philips has patented Ambilight technology built into their TVs – which is why other manufacturers do not incorporate these dynamic LEDs into their devices. Fortunately, the lighting technology can be imitated with external technology.

Several manufacturers offer external sets for retrofitting Ambilight, including Philips itself. In this context, external means that they have to be retrofitted to the television set independently after purchase.

The various Ambilight kits differ from one another, particularly in terms of the time and effort required to set them up and in their price. Everyone has to find the ideal solution for themselves. To make this easier, we present a few Ambilight sets with which you can retrofit the feature.

Until the Hue Play HDMI Sync Box was released, Signify, which sells its products under the Philips brand, offered only an upgrade option for Mac and PC. Now, with the Sync Box, there is finally an alternative for TV.

The box has several HDMI connections. Using them, up to four HDMI devices can be connected and linked to the television. A Hue Bridge and lamps from the manufacturer are also required. Other lamps are not compatible.

The box can control up to 10 Hue lamps at the same time, which should be sufficient for normal household use, especially when using LED strips as those can help achieve a broader lightning effect.

An additional features, such as the connectivity with voice assistants and Siri shortcuts as well as the compatibility with Dolby Vision and HDR10+ are also available. The big advantage of the Philips Sync Box is the easy handling during setup and the easy control by the Hue app.

In addition, the manufacturer already has a lot of experience with lighting technology through their Ambilight TVs. However, this is not the cheapest option considering the purchase of the Hue-Bridge and lamps. Nevertheless, for laymen, this method is a simple and reliable option to retrofit Ambilight.

Lightberry offers a DIY system that is also based on the Raspberry Pi. This method is particularly suitable for people with technical affinity who like a challenge and already have previous knowledge.

The Lightberry variant is the most favourable in terms of price. However, a Raspberry Pi is required, which should already be available in best case. All other necessary components, such as an HDMI converter, a memory card, an adapter and of course the LED strips, can be obtained from the manufacturer. Information on the construction and configuration of the Raspberry Pi is also provided on the website. For users with previous knowledge and those who enjoy tinkering, Lightberry is particularly suitable for retrofitting Ambilight.

You don’t need dynamic LEDs that adapt to the TV picture, but just want to add a little flair to your living room? Try a chain of LED lights.

The health benefits are just as good here as with Ambilight: the existing background lighting protects the eyes when watching television and reduces discomfort. With a small investment, atmospheric lighting can also be provided in the room.

The LEDs do not necessarily have to be attached to the TV, but are also suitable as a practical addition to the skirting board. The brightness and light color can be easily controlled via the remote.

The installation of a light strip is very easy. The strips are placed around the housing of the TV and then connected to the power supply. The supplied remote control can display any light that is displayed as a color on the remote control.

Of course, it is not necessary to attach the chain of lights to the television – this is also a nice and above all inexpensive way to immerse your living room in atmospheric light. 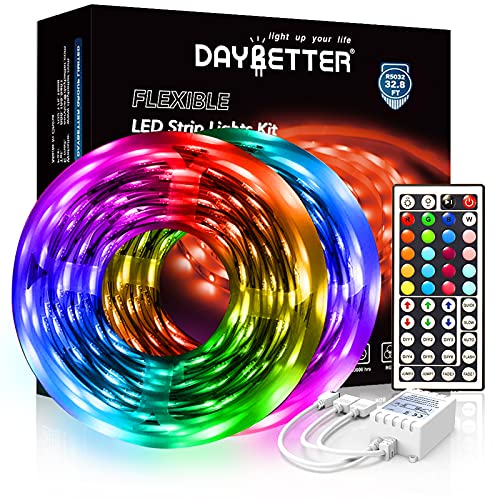 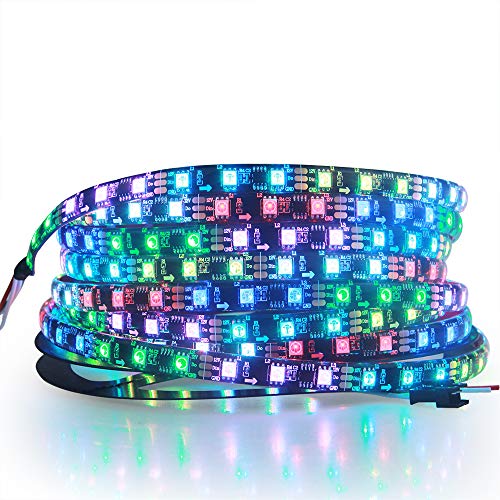 If you need something a little more sophisticated, there are also controllable LED light chains. Just like the Philips Hue, these can be programmed using an app to generate dynamic light.

Please note that is light chain is not very everybody: The app works fine on PCs and Macs, but on TVs it looks different. Only TVs with Android TV 5.1 or higher can download the paid app to control the light strips. Most Sony TVs can therefore be retrofitted with Ambilight.

Simply attach the light strips to the back of the TV and plug the included power supply into a wall outlet. The light strip is then connected to the Dream Color Light Box, which in turn is connected to the PC, Mac or Android TV via USB. Programming and control is done by the respective app.

Besides the Hue Play HDMI Sync Box, the lighting experts from Signify also offer an app-controlled picture synchronization. However, since this option is exclusively for Samsung TV owners, you will need a compatible device to use it. Starting with the 2022 model year and the Samsung Q60B, you will get the green light.

According to the manufacturer, the software is especially designed for movie enthusiasts and gamers. All content displayed on the TV – including that of game consoles – can be adjusted so that it matches the Hue lamps. For this purpose, the image signal on your tv will be analyzed on your smartphone and used to calculate the light control.

In addition to 4K and 8K content, the HDR10+ color space is also supported. Functions like intensity and brightness can be adjusted as needed. In the so-called entertainment area, which you can set up on the app, you can see the positioning of the lights and specify their purpose during use. This way you can have a maximum of ten lamps.

You can easily download the application onto your TV via the app store. If you do not yet have a Hue account, you will have to register as part of the setup process. This is not one of the cheapest solutions, but it is an official alternative. The app alone is an investment of 130 euros.

With the Philips Hue lamp, you are in for 80 euros. A Hue Lightbar table lamp with power supply costs about 65 euros. Lightbar extensions are available for just under 50 euros each. Depending on how large your room is, how strong the ambience effect and the degree of customization should be, additional lights may be necessary.

Searching for the
Best TVs 2023 ?
Other articles from category Practice & Guides

Recycling your old TV – What do I need to know?
* Prices incl. VAT, plus shipping costs. Please note that prices shown here may have changed in the meantime. All data without guarantee. Most of the time, these are so-called affiliate links. If you click on such an affiliate link and buy through this link, we get a commission from the relevant online store or provider. The price does not change for you.
🔥The best OLED-TV Deal🔥
LG's 2022 all-round wonder Evo panel, great picture quality and perfect gaming performance
LG C2 evo OLED in 65 Inch