The LG C9 is part of LG’s 2019 OLED lineup. It scores with outstanding picture quality, unmatched contrast, HDMI 2.1, top motion handling and great response time. The C9 also convinces with Smart TV features. There are only a few disadvantages, but these also carry weight. We’ll tell you more.

Processing and design of the LG C9

As usual, the construction and workmanship of the LG C9 are very good. In terms of design it follows last year’s models LG B8 and C8 – the screen covers almost the entire available area and the edge is very thin. The TV stands very securely and hardly wobbles.

Depending on the size, a sufficiently large table should be available, as the stand covers almost the entire width of the TV. The 55” and 65” variant have a very flat stand which extends almost entirely to the rear. This stand also provides a handy way to hide and guide cables to the rear. The 77” variant on the other hand looks identical to 2018’s OLED C8. If wall mounting is desired, this requirement has been settled.

The television itself is frighteningly flat. On the wall it looks good, as the LG C9 almost completely blends into the interior. Nevertheless, be careful when unpacking and setting it up!

Like all OLED TVs, the C9 does not have a backlit LCDLCD = Liquid Crystal Display - a type of screen using liquid crystals for creating the image panel, such as the Sony X950G. Instead, each pixel can be turned on and off, dimmed and no local dimming is required. This provides a black level unmatched by Non-OLED TVs.

The C9 also achieves best results in terms of contrast: Since individual pixels are simply switched off and adjacent pixels can glow at full brightness, the maximum contrast is theoretically ∞:1.

The viewing angle is extremely wide due to the OLED PanelThe panel is the actual screen of a television. There is different types of panels like OLED, LCD or Micro LED and different sub-types of LCD like VA or IPS.. Even from the side there are hardly any changes in black level and brightness. However, colors can change a little from the side. Televisions with VAVertical Alignment, type of LCD Panel panels like the Q90R use a special filter to counter this effect. This is not necessary with OLED TVs.

The Automatic Brightness Limiter (ABL) is a damper for the otherwise outstanding image quality. In large bright scenes, such as ice hockey, the brightness is automatically reduced to reduce the risk of burn-in. Even if that won’t bother most people, you can’t turn it off.

The C9 achieves its best performance in dark rooms. The perfect black is more effective and the colours appear more brilliant. If you live in a house or apartment with many windows and very bright rooms, you might want to look for a QLED set. Read more about this in our comparison of OLED and QLED TVs.

Naturally, Dolby VisionDynamic HDR-format with a color depth of up to 12 Bits and Mastering of up to 10,000 Nits, HDR10HDR10 Media Profile - HDR with a color depth of 10 Bit in the Rec. 2020 colorspace and Advanced HDRHigh Dynamic Range - image/video with more dynamic range (contrast range) by Technicolor are also supported, as with the 2018 devices. The second generation Alpha 9 image processor provides the power required for picture processing and motion interpolationArtificial calculation of more frames than the source material has to offer.

The motion handling of the C9 is incredibly good. Fast content can be played back almost without delay. The response time is about 0.2 ms. This value is so low that slow pans can result in stutter. To prevent this, the built-in Black Frame Insertion Feature (OLED Motion) or Motion Interpolation of the C9 is suitable. The former can, however, lead to JudderInconsistent time frame due to the input frequency not mismatching the TV's frequency (e.g. 24p via 60Hz).

As with any OLED television, there is a risk that very bright and static content may burn into the LG C9. Static contents are, for example, news bars or station logos. In the real world, there are hardly any such incidents, as such content is very rare and this type of wear takes a very long time. Smaller content, such as crosshairs when gaming, is no problem at all with techniques such as Pixel Shift being implemented. Station logos are automatically detected and dimmed by the C9. This virtually eliminates the risk of a burn-in.

White news banners such as CNN, which never change position or brightness, remain dangerous. But those who don’t set the TV to maximum brightness and don’t watch 24/7 CNN usually have nothing to fear.

Gaming on the LG C9

In combination with a Playstation 4 Pro or an Xbox One X / S, the C9 cuts an extremely good figure. Thanks to the almost immediate response time and a minimum input lag of about ~7ms at 1080p @ 120 HzHertz is the derived SI-unit of frequency with 1Hz=1/s - When talking about TVs this means how many different pictures a TV can display in one second. and ~13ms at 4K @ 60 Hz, gaming is really fun. There’s hardly any delay or blurred motion. Even HDR content can be displayed fantastically while gaming. HDMI 2.1 allows larger data transfers (48 Gb/s) that Playstation 5 and Xbox Scarlett will definitely take advantage of. VRRVariable Refresh Rate - synchronizes the display's refresh rate with the output refresh rate of the graphics card (HDMI Forum VRR) for gaming without tearing is also supported – but so far only with the Xbox One X and only by the 55″ and 65″ versions of the C9. The Auto Low Latency Mode (ALLMAuto Low Latency Mode - Automatically detects connected consoles and keeps input lag as low as possible.) is a feature that is also made possible by HDMI 2.1. This reduces the latency between controller and screen to a minimum automatically.

As with almost all 4K UHD TVs, the picture is worlds better than the sound. The C9 clearly reproduces voices, but it simply lacks bass, as it is often wanted and desired in action movies or video games. If you want to buy the C9 for your own home cinema, you should consider the additional investment for a soundbar or hi-fi system. Dolby AtmosObject-based surround sound format with 3D-Sound from any direction is also supported by the LG C9, so the consideration to buy a corresponding soundbar for Dolby Atmos is justified. The C9 has an HDMI eARC port, which allows significantly higher data transfers than normal HDMI ARC. This even makes uncompressed Dolby Atmos and DTSMulti-channel-sound-system (Surround Sound) competing with Dolby Digital:X possible.

The interface based on LG webOS 4.5 is very easy to use and runs fast and smooth. Some of the apps are jerky though but this is probably going to be fixed in a future update. Three options are available for operation: 1. voice control 2. remote control 3. app on the smartphone.

The voice control works well. Even better is the use of the remote control as a mouse cursor on the screen by moving your hand, similar to the Nintendo Wii. If you don’t like this, you can navigate through individual fields with the direction keys as usual. Although the remote control isn’t as chic as its competitor Samsung, it’s at least as functional. The smartphone app is intended more as a supplement than as a stand-alone operating device. Basic voice searches and key functions can be performed with this app.

The most important apps are already pre-installed and a lot more are available. Google Assistant, Amazon Alexa and Apple AirPlay 2 are also on board.

Variants of the LG OLED C9

In an older test we have already introduced the LG B8. The successor B9 is now available. It is now home to the second generation Alpha 7. In comparison, the C9 features the more powerful second generation Alpha 9. Image processing and interpolation are on a slightly higher level with the C9 – but this is only noticeable when these features are used. And if that’s the case, only image enthusiasts will notice a difference. Therefore, laymen should go for the B9. The sound of the B9 has been reworked, but we find that the new sound is not the same as that of a good surround soundbar. The LG E9 is once again superior to the C9 in terms of equipment. The design is completely different: the stand protrudes only to the rear and the TV is completely flat to the front. It has the same technical features as the C9. There’s also an integrated soundbar that raises the sound of the TV. Whether the change in design and the sound bar justifies the heavy additional charge is questionable. That still isn’t all. The LG Signature Collection has an OLED TV up its sleeve for those who are not satisfied with the B9, C9 or E9. The W9 has the same technical features as the C9. HDMI 2.1, Google Assistant, Apple AirPlay 2, Amazon Alexa – all this is on board. Unfortunately, the HDMI Forum VRR feature for tearing-free gaming is missing for now. Another decisive difference: Unlike the B9, E9 and C9, the television’s technology is not behind the screen.

It is located inside the supplied sound bar, which is connected to the actual screen with a single cable. The screen itself is hung on the wall and resembles a window with a ridiculously mall depth of only 3 millimeters. The LG W9 is the flagship of the OLED series and has a corresponding impact on your wallet.

More info about Comparison of the 2019 series by LG is also available!

The LG C9 is a 4K OLED TV that provides a picture quality that won’t be surpassed so easily. Sharp movements and breathtaking contrast make for a fantastic home cinema experience. Gaming is also fun with the C9. Although the sound lets a little air up – this can be easily retrofitted with an external sound bar without having to resort to the more expensive LG televisions of the 2019 lineup.
With HDMI 2.1 the LG OLED is ready for the next generation of gaming consoles. With the C9 also supporting all the formats which still need to become more widely available it truly is a future proof set. 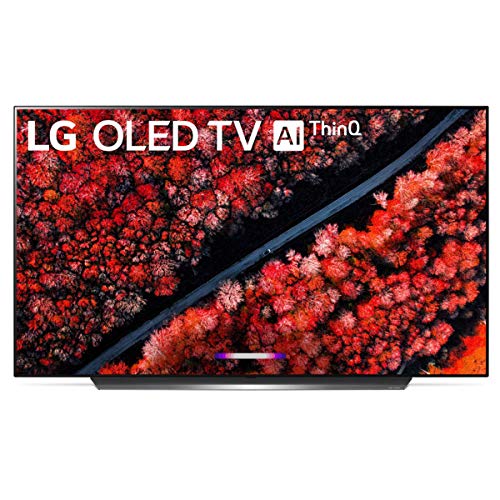 88 %
Are you interested in the LG C9 OLED?
Then benefit from its discount price now!