The LG SM8600 is part of LG’s 2019 Nano Cell Display Lineup. The SM series replaces the SK series from last year. Its technical features make it a great device for bright rooms and a tough competitor to the Samsung QLED Q60R. Here’s what makes the affordable 4K TV performance and why it’s a good TV for tight budgets.

The LG SM8500 is beautifully designed and well crafted, which falls in line with LG’s style of design. It is available in two different designs that don’t differ technically. The SM8600 is equipped with a half moon shaped central stand. It is available in sizes 49, 55, 65 and 75 inches. Be careful with the model numbers, though: While the smaller sizes are marketed under xxSM8600, the 75 inch model is called LG 75SM8670. Optically and technically, these TVs are all the same.

Picture quality of the LG SM8600

The picture quality of the LG SM8600 is good and especially suitable for bright rooms. The built-in 120 HzHertz is the derived SI-unit of frequency with 1Hz=1/s - When talking about TVs this means how many different pictures a TV can display in one second. IPSIn-Plane Switching, type of LCD Panel panel provides a pleasant brightness and the screen is hardly susceptible to reflections. In dark rooms, however, things are different: Black tones look rather greyish, as IPS panels are rather low-contrast and the local dimming delivers only weak performance. For this reason, the TV gets its difficulties with demanding HDRHigh Dynamic Range - image/video with more dynamic range (contrast range) content. The viewing angle, on the other hand, is very wide and the picture remains equally bright and rich in color when viewed from the side. Inside lies the second generation Alpha 7 image processor, which also resides in the LG B9.

These features make the LG SM8600 an excellent alternative to the Samsung RU8000 or the Samsung Q60R for light rooms. The RU8000 and Q60R with their VAVertical Alignment, type of LCD Panel panel are, on the other hand, good performers for dark rooms.

However you’ll have to switch to game mode in order to have those specs. It performs equally well for consoles and PC gaming. As a little extra there is Auto Low Latency Mode. Unfortunately VRRVariable Refresh Rate - synchronizes the display's refresh rate with the output refresh rate of the graphics card is not supported. Thanks to the wide viewing angle through the IPS panel, gaming with many friends is a lot of fun.

As usual for flat screen TVs, the sound of the SM8600 is unfortunately only poor. While it gets loud enough without distorting and plays dialogues pleasantly understandable, the bass range is barely pronounced. You won’t find a decent rumble for action movies here. Even high frequencies lack airiness. It’s definitely enough for the occasional movie night or the afternoon program – but if you’re a sound enthusiast, you’re well advised to buy a soundbar to improve your sound.

The Smart TV features are very good and very easy to use. All apps run on LG webOS 4.5, which is known for its wide range of apps and features. Of course, the most important applications are already pre-installed, this concerns Netflix or Amazon Prime Video, so that you can start streaming immediately after unpacking and installation.

In terms of performance, the LG SM8100 is the entry-level device in the LG NanoCell series of 2019. It features a 60 Hz IPS panel, as opposed to 120 Hz in the SM8600. It also doesn’t have the Alpha 7 Gen2 image processor. It also has only four HDMI 2.0b ports, so there is neither VRR nor eARC.

The HDR formats are similarly limited: there are only HDR10HDR10 Media Profile - HDR with a color depth of 10 Bit in the Rec. 2020 colorspace and HLGHLG or Hybrid Log Gamma facilitates the transmission and reception of signals by combining the SDR and HDR signals. If the device supports HDR, the HDR part of the signal is used, otherwise the SDR part., no Dolby VisionDynamic HDR-format with a color depth of up to 12 Bits and Mastering of up to 10,000 Nits and no HDR10+License-free, dynamic HDR-format in competition with Dolby Vision. Dolby AtmosObject-based surround sound format with 3D-Sound from any direction is not supported either, but DTSMulti-channel-sound-system (Surround Sound) competing with Dolby Digital:X is. The SM8200 is aimed at an audience that doesn’t have much interest in HDR content and doesn’t need the very best 4K image. That makes it correspondingly affordable. With the LG SM8600, you get a device that performs particularly well in well-lit living rooms with lots of windows. Thanks to the IPS panel, the brightness is high and the viewing angle very wide, so watching TV and gaming with friends is fun. Whether you’re on a console or a PC, the 120Hz frequency ensures every content is displayed sharply and fluidly. For newcomers to the world of 4K with a bright environment, the LG SM8600 is just the right choice, whether for movies or occasional streaming. However, if your living room or bedroom is very dark, we would recommend a TV with VA or even an OLED panel. 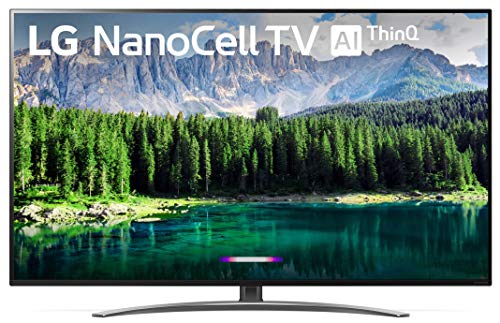 63 %
Are you interested in the LG SM8600?
Then benefit from its discount price now!

The LG SM8600 is available in following variants: