The Samsung Q80T is the cheapest 4K QLED that has both full array local dimming and an ultra-viewing angle layer. With the Q80R released in 2019 as its predecessor, it naturally takes on a difficult legacy, as this is a great all-rounder with excellent picture quality. But is the Q80T just as good, or does it have to hide from its predecessor? On tvfindr we will take a closer look at the Q80T and you can decide for yourself whether this is an up- or a downgrade.

Design and build quality of the Q80T

The design of the Q80T is minimalist, which is underlined by the thin frame and the narrow pedestal stand. The stand is centrally located and its small size makes it perfect for placing a soundbar in front of the TV – even on small TV tables. However, due to the small footprint, the TV will wobble a little when pushed.

Since the Q80T has a shallow thickness, it won’t stick out much when mounted on the wall. Moreover, the interfaces are directed towards the edge of the screen, which means they are always easy to access. Cut-outs for cable routing are integrated into the stand, which can also be covered by a panel. Thus nothing stands in the way of a clean cable management.

The workmanship is excellent and makes a good impression, even though the TV is mostly made of plastic.

The Q80T has a deep and even black, which is the result of the 10 bit VAVertical Alignment, type of LCD Panel panel installed by Samsung. To compensate for the negative aspect of the low viewing angle, which is indispensable when using such a panel, an Ultra-Viewing Angle layer was integrated. To diffuse reflections and glare effects a glossy display surface is integrated. In combination with the extended viewing angle the TV can be used well in a setup where several people are looking at the TV, or an oblique viewing angle is present.

It has a good contrast ratio, which is further enhanced by Full Array Local Dimming, resulting in a great display of HDRHigh Dynamic Range – image/video with more dynamic range (contrast range) content. The Q80T’s maximum brightness is also more than sufficient to show even small bright highlights well. It is bright enough to be used in bright rooms during the day, but the picture quality suffer much from this. It’s also noticeable in bright scenes that the TV appears a bit darker in the corners than in the center. The wide color gamut of the display also ensures strong colors, which is especially good for HDR content.

The Q80T uses the Black Frame InsertionProcess that inserts black “blank images” as intermediate images. This makes movements appear finer and clearer. feature, which minimizes Motion Blur. Through motion interpolationArtificial calculation of more frames than the source material has to offer, content with a lower frame rate is very well interpolated to 120 Hz. There are hardly any artifacts visible, even in intense scenes!

The Q80T has an HDMI 2.1, which enables a resolution of 4K with a refresh rate of 120 fps. For current consoles, this factor is of little relevance, since neither the Playstation 4 nor the Xbox One are capable of generating such content. However, both the Playstation 5 and the Xbox Series X should be able to display games in a 4K resolution with 120 fps. Therefore the Q80T is an excellent choice for the new generation of game consoles. In addition, the Ultra-Viewing Angle layer makes the TV perfectly suited for CO-OP games or team sports games such as FIFA and Pro Evolution Soccer, as several players can use the Q80T from different viewing angles.

The Q80T’s 60W speakers sound quite balanced in general, but it lacks bass, which was to be expected with built-in speakers. For a normal sized living room they are sufficient to produce a passable sound, but in no way is it the overwhelming experience needed to create a great atmosphere. To compensate for this weakness, the setup can of course be expanded with a soundbar – then a true home cinema experience is possible!
The TV supports Dolby DigitalMulti-channel-sound-system for up to 5.1 channel Surround Sound Plus, but no DTSMulti-channel-sound-system (Surround Sound) competing with Dolby Digital, which is normal for Samsung devices. But thanks to the HDMI eARC support there is Dolby AtmosObject-based surround sound format with 3D-Sound from any direction! 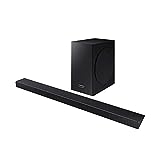 The Tizen 5.5 operating system ensures that the Q80T is equipped with many smart features. Besides the integrated language assistant Bixby, it is also possible to use Amazon Alexa and the Google Assistant. The TV is also compatible with Apple Airplay 2 Besides a large selection of apps, the use of various streaming services is also possible. Amazon Prime Video, Disney+ and Netflix are already pre-installed. Thanks to Samsung SmartThings, the TV can act as a control centre for various smart home applications, which can then be controlled via One Remote.

The Q80T also has a Twin Tuner and other functions such as PVRPersonal Video Recorder, recording TV programs to a USB-Memory Device and Time Shift.

Great TV for most purposes

The Q80T cuts a fine figure with its good picture quality and excellent motion handling. Due to this fact in combination with the HDMI 2.1 port it is an extremely interesting option for gamers. Also sports fans will make a quite good deal with this TV. HDR content is superbly displayed due to the good contrast ratio with Full Array Local Dimming. Thanks to the Ultra-Viewing-Angle layer, it can be used in many setups, even if the viewer has an oblique viewing angle on the display. It’s a bit of a shame that the corners always look a bit darker than the rest of the picture, but that’s not too prominent.

In comparison to its namesake, the Q80T scores slightly worse than last year’s Q80R in most categories, which means that the Q80T can only be seen as an upgrade to a limited extent. But beyond this comparison, it is a TV that is very well equipped for most content. Especially the Ultra-Viewing-Angle layer is a great feature, which makes the Q80T worth the extra price compared to the Q70T!

Alternatives to the Samsung Q80T QLED

The Q70T was also released in 2020 and is the next cheaper QLED from Samsung. However, when comparing these two devices directly, it quickly becomes obvious that the Q80T plays in a different league. The picture quality of the Q80T is much better because it has Full Array Local Dimming and the Q70T only has edge lit. In addition, the Q70T’s viewing angle is quite small, as it does not have the Ultra-Viewing-Angle layer like the Q80T. These two circumstances alone make the Q80T a much better product, and the extra cost is really worth it. The Q70T’s reflection handling is also not comparable to the Q80T, which makes the Q80T look much better in bright rooms.
Both have an HDMI 2.1 port, which makes them interesting for console gamers, but overall the Q80T does better under all circumstances than its sister model.

The Q85T can be used somewhat well in bright rooms, but its picture quality still decreases noticeably. The X950H can be perfectly used here, as it has a high maximum brightness of ~1000 Nits and excellent reflection handling. Both TVs use a layer to extend the viewing angle, but the X950H’s one is not really convincing. At a slightly oblique viewing angle, the colours become blurred and the picture no longer looks nearly as good, making the Q85T clearly superior. In addition, this layer has a negative effect on the contrast ratio which is especially noticeable on the Sony device. Its contrast ratio is only 3200:1.

The X950H is not really suitable for gamers. Playing games is fun with it, but it misses many useful features that are already integrated in cheaper devices. For example, the possibility of a variable refresh rateHertz is the derived SI-unit of frequency with 1Hz=1/s – When talking about TVs this means how many different pictures a TV can display in one second. is missing and the input lag of 19ms isn’t quite as good.

Moreover, an HDMI 2.1 interface is missing.

LG’s CX performs better in comparison with the Q80T. This is mainly due to the OLED’s much better picture quality. This is the case because it has brilliant contrast on the one hand and perfect black on the other. The supposed disadvantage that OLED TVs perform worse in bright rooms is also only partly evident in this comparison. The Q80T does get a bit brighter, but the maximum brightness is still sufficiently high and the reflection handling is equally excellent, which allows both the CX and the Q80T to be used in brighter rooms. A small disadvantage for the picture quality is the Automatic Brightness Limiter, which reduces the CX’s maximum brightness in large bright scenes to avoid burn-in. The motion handling looks similar. The Q80T’s highlight was the Motion HandlingDisplaying fast moving objects, but it can’t quite keep up with the CX. Both devices have excellent characteristics here, but the response time of the CX is much lower at 0.2ms, which results in no visible blur trails. Because of the low response time slow pans can result in stutter – but it can be corrected easily by the motion interpolationArtificial calculation of more frames than the source material has to offer feature The input lag is very low on both TVs, but the Q80T is ahead here, which can be important for gamers. Both have an HDMI 2.1 port, which makes them suitable for next-gen consoles.

Thus, a direct comparison shows that the CX scores better in almost all categories. Both devices have a quite similar gaming performance, but the CX is more convincing in general with a considerably better picture quality.