The LG B9 is one of the newest OLED TVs from the South Korean manufacturer LG. It replaces the OLED entry-level model LG B8 from the previous year. We took a closer look at the new B9 and give you our detailed thoughts and opinion here. It features HDMI 2.1, the usual OLED benefits and other exciting features.

Workmanship and design of the LG B9

The workmanship and design of the LG B9 are fantastic. As with OLED TVs, the LG B9 is also very thin – perfect for wall mounting. Those who prefer to use the stand will notice that the base of the B9 is made of plastic. The predecessor B8, on the other hand, has a metal stand. This change makes the TV shake slightly more when you touch it, however, you shouldn’t have any problems with the TV, as it’s an absolute high-end device.

The image quality of the LG B9 is excellent. As usual with OLED TVs, the contrast is ∞:1, as individual pixels can be switched off. One pixel can emit one hundred percent brightness, while the adjacent pixel is switched off. This continues to produce perfect blacks, which LCDLCD = Liquid Crystal Display - a type of screen using liquid crystals for creating the image TVs have not yet been able to produce as convincingly. In addition, the viewing angle is very wide, so that colors and brightness do not change even when viewed at an angle. Also, it supports Dolby VisionDynamic HDR-format with a color depth of up to 12 Bits and Mastering of up to 10,000 Nits and HDR10HDR10 Media Profile - HDR with a color depth of 10 Bit in the Rec. 2020 colorspace, which is great.

The brightness is decent but doesn’t come close to the peak value of the brother model LG C9. If HDRHigh Dynamic Range - image/video with more dynamic range (contrast range) is important to you, you might consider investing more. The top brightness is further reduced by the Automatic Brightness Limiter, which takes action in very bright scenes. A classic example would be a ski slope. The ABL automatically darkens the whole picture to prevent burn-in.

The B9 houses the second gen Alpha 7 image processor. The C9, on the other hand, features the more powerful second generation Alpha 9. In real life this hardly makes a difference so far. The improved interpolationArtificial calculation of more frames than the source material has to offer and image processing will be only be noticed by enthusiasts.

Unfortunately, professional tests have shown that the color calibration is somewhat poor. This is mostly due to the white tones, which have a slight yellow tint. However, readjustments can be made: After calibration, values are almost perfect. To make this possible, professional tools are necessary, so it might be worthwhile to consult an expert. Nevertheless, the performance of the B9 is great considering the price.

Excellent motion handling with the LG B9

The LG B9 masters display of fast moving content, also called motion handling, without major problems. The response time is only 0.1 ms. This value is so low that soap opera effect can occur. This makes the background appear flat in contrast to moving characters being unusually lifelike. If desired, this can be switched off.

Risk of burn in of OLED TVs

If you’ve ever researched about OLED TVs, you’ve certainly come across the term burn-in before. As with all OLED TVs, there is a theoretical risk with the B9 that very bright and static content can burn in. Examples are news bars, station logos or, as discussed, a ski slope or hockey field.

Burn-in is extremely rare in normal use. This type of wear takes a very long time and would require an unusually high amount of usage. In order to further minimize the residual risk, there are innovative techniques such as Pixel Shift, which for example recognize crosshairs when gaming or automatically dim stations logos. This virtually eliminates the risk of burn-in.

Gaming with the LG B9

Video games on the B9 are a lot of fun, largely due to the availability of HDMI 2.1. In Game Mode, which is automatically controlled by the LG B9 when using a game console, the input lag is extremely low. 7 ms at 1080p @ 120 HzHertz is the derived SI-unit of frequency with 1Hz=1/s - When talking about TVs this means how many different pictures a TV can display in one second. and 13 ms at 4K @ 60 Hz. Unfortunately no information can be given about 4K @ 120 Hz, because there is no content yet. This statement alone makes the LG TV a future-proof device, as Playstation 5, Xbox Project Scarlett and Google Stadia will make use of this resolution. It is also very suitable for PC gaming, as 1080p and 1440p @ 120 Hz are natively supported.

HDMI Forum VRRVariable Refresh Rate - synchronizes the display's refresh rate with the output refresh rate of the graphics card for gaming without tearing is also supported, but so far only by Xbox One X and S and PCs with AMD graphics cards.

As with the predecessor LG B8, the sound is a bit lacking. While dialogues play clearly, the TV reaches its limits especially in bass-heavy action scenes. For a better sound experience, it’s worth investing in a soundbar or even a stereo system. If you’re a Dolby AtmosObject-based surround sound format with 3D-Sound from any direction fan, the B9 has the best prerequisites. Since the LG B9 is HDMI 2.1 capable and supports eARC, uncompressed Dolby Atmos is possible via Dolby TrueHD. DTSMulti-channel-sound-system (Surround Sound) competing with Dolby Digital:X via DTS-HD MA is also possible.

The smart features of the B9 run on LG webOS 4.6. It only differs slightly from its predecessor webOS 4.5. The remote control is the same as on the C9 and E9, which is nice. The selection of apps is very large and the interface is very easy to use. Classics like Netflix, Amazon Prime Video, YouTube or Google Play are pre-installed. Unfortunately there are ads, which can’t be opted out of.

Model variants of the LG B9 OLED

The predecessor of the LG B9 is the LG B8. There are some differences across the years. The image quality is comparable, but the B8 does not have the future-proof features of the B9. There is no HDMI 2.1, which eliminates VRR, Dolby Atmos via eARC and 4K @ 120 Hz. If you have no need for these features, you can now get a good bargain with the B8! We have already discussed the LG C9 thoroughly in a different article. In contrast to the LG B8, we are dealing with a more powerful model, which is also more expensive. The more powerful Alpha C9 processor doesn’t provide any visible differences in image quality, but could have an influence on the possibilities with HDMI 2.1. The design is also slightly different. Although the B9 offers good performance in series, movies, sports and video games, its bigger brother the C9 is a bit better in all disciplines.

The differences between the LG E9 and the B9 are essentially the sound and the design. The E9 doesn’t have a plastic stand, but a stylish glass front. The performance and picture quality are the same as with the LG C9, but the E9 has the better sound. The LG Signature series is something for all those who need something better than the C9, B9 or E9. You don’t have to worry about bad TV sound here: The LG W9 comes with a millimeter-thin OLED panel and a soundbar that not only delivers first-class sound, but also houses all the electronics. Power, video and audio signals are transmitted via a single cable. As a result, the panel has to be mounted on the wall and is therefore hardly noticeable. The picture quality is great.

Also part of the Signature series is the LG Z9, which was recently unveiled at IFA 2019. Here we have an 8K OLED TV in 88 inch size. At the IFA it looked fantastic and delivers an incomparable resolution. But that has its price: According to our insider information, it will cost about $30.000. Pre-orders are already possible.

The LG R9 is also one of LG’s newest inventions and not yet available on the market. In our opinion, the name “ROLED” would fit much better as we are dealing with a rollable OLED TV. When not in use, the TV rolls up like a blind and disappears into its housing, which can also be used as a sideboard.

The TV dynamically adapts to any content and also looked great at IFA 2019. A price and release date are not exactly known at this time. We consider Q4 2019 to Q2 2020 to be realistic.

The most affordable OLED from LG is now even better

With the LG B9 you get an excellent – and above all affordable – OLED TV that is well prepared for the future. This is mainly due to HDMI 2.1. Only this transmission standard enables 4K @ 120 Hz, uncompressed Dolby Atmos via Dolby True HD, VRR and Auto Low Latency Mode. The picture quality is great, but can partly be surpassed by the more expensive LG C9. So if you’re not quite so demanding and don’t need the highest quality, the B9 is a device that can cope with any situation and performs wonderfully in everyday life. 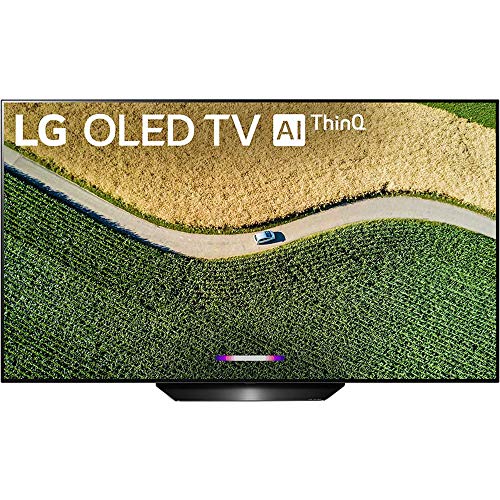 The LG B9 OLED is available in following variants: